Named for the strain of leaf called "ligero," which is a strong and peppery type of tobacco that gives many full-bodied cigars their oomph. As you might imagine from the name, La Flor Dominicana's Ligero series is a strong, spicy and full-bodied smoke.

Air Bender an odd name indeed, this full-flavored blend hails from the La Flor Dominicana factory of the Dominican Republic. Made with a dark Habano wrapper grown in Ecuador, each cigar combines a robust mixture of Cuban-seed long-fillers grown in the Dominican bound by an equally bold Dominican binder.

The smoke is smooth but rich and hearty with big, Cuban-esque nuances and a full-bodied character. In addition to a '94' rating, La Flor Dominicana Air Bender was named one of the world's 'Top 25 Cigars', which stated, "Bold from the very first puff, the cigar is strong and meaty, full of spice and coffee notes, with a finish reminiscent of a whiskey barrel." 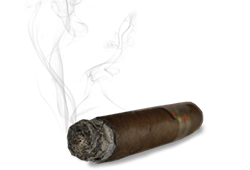